What a disappointing movie! I thought I was going to be frightened out of my wits but instead, I fell asleep! Oddly enough, that's what happened to everyone who went to see the movie at Black Hole Cinema.

When I woke up I saw some of the other people still half asleep, others were still sleeping and some of them were even snoring. When we tried to exit the theater we found out the doors were stuck and that we could not get out. I went back to my seat to pick up my half full tub of popcorn.

I saw a doctor, and I asked a man how I could exit the theater, but he didn't know.

OK, while I was just thinking about why I couldn’t get out of there, a girl came up to me, hugged me and said: “Darling, we can have some fun.” I didn’t know what to say because I didn’t know this girl.

I was just about to kiss her after having given her a hot look when the speaker from the theater turned on and a voice said: “Attention, attention!" I was puzzled and mad at the fate that didn't allow me to kiss that chick.

The voice then continued:  “You are being kept inside for a test. Nobody can escape. We'll give you further details soon."

Suddenly, a group of zombies entered the theater, slowly marching down the aisle! Now we knew what was happening! The doors were being held shut from the outside by zombies! The announcer's voice had sounded a bit strange, come to think of it.

ESL Group Story Writing Class September 19 2010
I was preparing to go to sleep early because the next day I'd have to play the final of the city football cup. The phone rang. It was a sexy female voice. "I'm Christine" - she said - "I saw your profile on a dating site and I liked it. Let's go out tonight."
It was a very nice offer, but I was afraid to lose my chance to be one of the main players on my team.
The coach depended on me and I considered my decision to play this game as a challenge to prove my skills. "OK," I thought, "Just one night with this female won't matter so I decided to stay out all night with her. But maybe something had happened to her because when I arrived at that place, no one was there.
I was thinking that I may have made a mistake about the place when the cell phone rang. "Muahaha" -the sweet lady said- "I am Christine, your enemy. I am the coach’s daughter of the enemy team." "And now you are lost because I changed the schedules for the game tomorrow. It will start even earlier, muahaha," Christine said. I was mad.
Even though I was angry, I answered Christine in a calm voice. I didn't want to let on that I wanted to explode, to that wicked woman! "OK, thank you Christine. You're doing me a favor because I'm about to sign a contract with your team," I told her. That, of course, was a lie, but I wanted to throw her off guard.
"I don't really think so," - she answered- "If it were true, I would know about it. Anyway, you’d better hang up and start walking home." And she hung up.
I looked around. No one was around. My taxi had left, so I started to walk home. A car sped by, a paparazzi took a picture of me and drove away.
It was a risk to leave my house tonight and to go to meet Christine. I blamed myself for deciding to meet her at this critical time. I thought that it may drive me to lose my concentration during tomorrow's game.
I decided to forget it for tonight and went to bed to be ready for the game tomorrow.

Interview with an Alien

ESL Group Story Writing Class. September 12, 2010
There was broken glass all over the floor. There were feathers gently floating down from somewhere.
There was also a lot of blood and body parts all around. Special Agent Dale had no doubts. It had all started with a pillow fight. Other things he could not understand. Whose bodies were they? They were not human (phew). They looked like something he had never seen before.
I had just now reached the place. I thought it must have happened suddenly because 30 minutes ago, everything was all right. I had to meet the owner of the company that I wanted to work in.
I was very scared and didn't know why this case was here. I thought maybe whoever caused this came from a UFO or maybe they wanted to capture Earth.
My other illogical thought coming into my mind right after that was: "I've been pranked!"
By the way, that wouldn't be such a weird theory, being that I was applying for a job at Hilarious Pranks LTD: the biggest company manufacturing pranks and jokes of all kinds.
Read more »
Posted by Giovanni Erba at Sunday, September 19, 2010 No comments:

Posted by Giovanni Erba at Saturday, September 18, 2010 No comments:

I was sitting at a table in the corner of a cafe when an old man burst into the restaurant.  His face was as white as a ghost and he was almost out of breath.

Suddenly I noticed that old man had blood on his hands. The manager noticed it too, and he started to look white too.

“I'm afraid I don't know what to do.  Should I call 911 or continue to watch what's happening?” I thought to myself.

All the people from the restaurant went out into the street.  There were a lot of people in the street and they were all going off somewhere. The city was covered with a black cloud of smoke.

I also left the restaurant and ran into the street. I could hardly see because the black smoke was so thick. All of a sudden, I felt someone (or something) tapping me lightly on the shoulder.  I turned around to see who or what it was and I gasped. 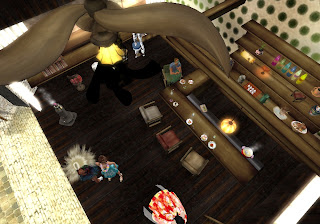 During excursion class we visited the set of  David Lynch's new movie and we ended up as extras in the film.

Here we are rehearsing  the bar scene, waiting for the star of the movie. 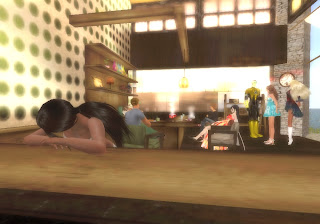 Mr. Lynch was very pleased with this shot and told us it will be included in the final cut.

Posted by Giovanni Erba at Monday, September 06, 2010 No comments: 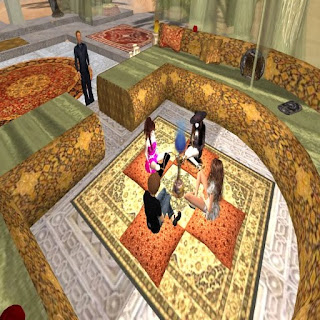 The teacher will be Inge Qunhua. She has some experience in getting students stoned, 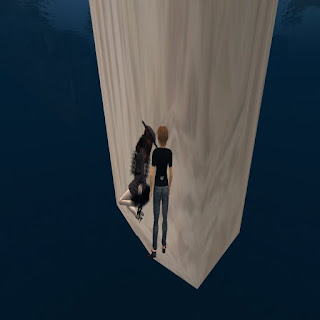 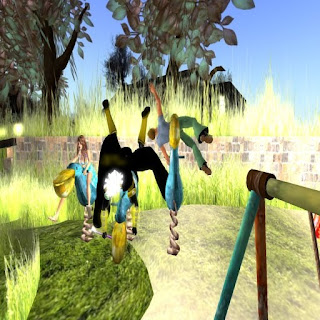 or mess students up in some other way.


But don't worry! This class will be in classroom 3.
Safe an quiet. She'll see you there.


Posted by Giovanni Erba at Thursday, September 02, 2010 No comments: