ESL Group Story Writing Class December 29, 2011
I had been out of work for nearly six years but I wasn’t too concerned because I still had plenty of money stashed away from the money that I embezzled from my former employer.  That’s right, I stole money from that cheap bastard because he robbed me of what was most dear to me!

I don't want to recall that memory anymore, it's painful and my biggest secret in my heart.
We say that money doesn’t buy happiness, but it's wrong. During those 6 years I spents my time under the sun. But nothing lasts forever...  One day I came home from a fishing expedition and my girlfriend told me that 3 men were looking for me. One was old, the other 2 were young and looked bad.

Being far from the madding crowd, away from the hustle and tussle, din and bustle of city life, the most cherished thing for me was peace. I wanted to get my composure back at any cost. But What is this? Is my past running after me once again?
I was very upset and started to prepare for escape and wondered if I should take my girlfriend with me. I thought the world was ending so I wanted to do something I never did before.

I looked at my girlfriend and thought about how faithful she had been to me. She had my back when I was arrested for stealing from my boss. Because of her testimony, I was released. I got away with the crime!  I decided to take her with me on my new adventure.

We went a small and peaceful village. Nobody knew us and we had a new life there. During those days, were happy and forgot all of our guilt. But unexpected things happened...

Story Class. Thursday 29 December. 6am PST. One time only

Alianaluz is back for a visit and will teach a Story Writing class tomorrow. Too bad it's one time only.
See you at the school.

This class: TEXT. Story Writing. During this class students will write a short story. Join us. Come have fun and get your creative juices flowing!

Posted by Giovanni Erba at Wednesday, December 28, 2011 No comments:

This is the club where we had the party. It's on hiromi Collas' land and she also did all the decorations outside...

There were many people who had not been at the school in a long time. It was so good to see them. 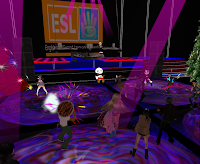 I had a lot of fun. In this picture I'm the one with the glow sticks.


For the first hour orion (kristof.titanium) was the Dj, then magros, Adhams and hiromi took turns at the dj booth.


See you all at the next party. maybe this time you won't have to wait 3 years!

Posted by Giovanni Erba at Tuesday, December 20, 2011 No comments:

hiromi Collas and Taiyo Klees, are organizing a school party for Friday 16 December at 6am PST.
Everyone is invited: students, teachers, Help Team members, Class Runners and group members.
We don't have many parties so you'd better not miss this!
It will last one hour, so don't be late.
The party will be at Hiromi's place: http://slurl.com/secondlife/The%20Gate/241/220/2002
Posted by Giovanni Erba at Wednesday, December 14, 2011 No comments:

You are all invited to the Christmas Party December 16 at 6am PST.

Hiromi Collas will be the guest. Thank you!

Posted by Giovanni Erba at Thursday, December 01, 2011 No comments: