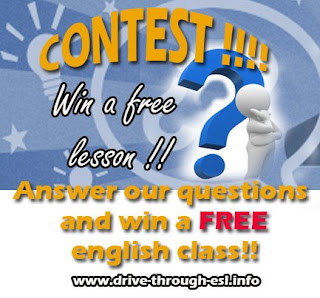 
Mamacu won again!!!!.
But all the participants were very very close!!
Try again with our new quiz !! You can win a free lesson!!


Go to the comments of Quiz 21  to check the correct answers.

Schedule changes for the holidays

As usual, the school will stay open during the Christmas season, and we'll have the traditional Excursion Class with Inge on Christmas day.
Happy Holidays to everyone.
Posted by giovanni tweak at Saturday, December 21, 2013 No comments:

Congratulations!
Mamacu and Laci won!!.
Gigi and Romantic were very very close!!
Try again with our new quiz and you will get another point!!
Go to the comments of quiz# 20 to check the correct answers.

Mamacu is again the winner after 2 weeks. Congratulations!
Other participants went very close. They didn't win, but they lost nothing.
Try again!
Go to the comments of quiz# 19 to check the correct answers.
Read more »
Posted by giovanni tweak at Monday, December 02, 2013 No comments:

Story class: every Sunday at 7am PST

Michelle came back to her apartment after work and turned on the TV.
A talking head appeared on the screen and said: "Hello".
Michelle went to the kitchen to put the groceries she had bought in the refrigerator and hear the voice coming from the TV saying: "Hello Michelle".

Michelle was petrified and shrieked like a small child and ran screaming for the front door.
She went to the TV and found that the TV was off. She became afraid and wondered from what was happening .
She was shivering while she turned off the TV. All of sudden the phone rang and she picked it up. Someone on the phone was whispering in a threatening way.

The voice on the receiver was the same as the one on TV. Michelle shouted, "Who are you?". She heard a click and the voice was gone.

The voice disappeared from the phone and appeared on the TV again . The voice told her: "Where is your son? Do you miss it?". She started to search her son in every room of the house. She didn't find him . She was in shock. She picked up the phone again to call her husband. She found the same voice on the phone. It said "Hang up the phone right now."
The caller said, "I can see you, don't do something stupid.. Your kid is with me! Don't call the police; if you call police then I'll kill your son.