And We Won't Have the Recipe of the Franchina Lemonde

ESL Group Story Writing Class June 19, 2011
It was snowing again for the fourth day in a row, and it was the middle of July in Arizona! Then I took my coat and tanning lotion with me.

So I went to the nudist beach but it was full of people. As there was no place for me, I came back home and I drew all the shades and began to listen to classical music in the dark.

After a while I got all sweaty and tired, and I started to prepare some lemonade. The doorbell rang, and there was a cop at the door.  He didn't seem bothered by the fact I was naked and sweaty.

I answered [or "told] him that I had no permit and that I didn't care about that. I decided to go explore the abandoned factory at the other side of the street and I entered through a small window, and then I was in a large room with tags on the walls.
I told him I wanted to go to China. So I decided to prepare some food for the trip.

The English Grammar for Beginners Series start Monday Jun 13 at 2am PDT.
Two classes/week Mondays 2am PDT, and Thursdays 1am PDT
It will last 15/20 classes.
The teacher will be Sol Nagy and the classes will be VOICE.


Here is the description of the first 2 lessons:

Monday June 13 2001, 2am PDT
The English Alphabet; Alphabet practice; Numbers; Interesting numbers; am/is/are  The questions What ...? Who ...?; Fill in all the lines

Thursday June 16 2001, 1am PDT
English Greetings, Introductions; People, Places, Nationalities where?; Who is this?/Who are they?; What to say. 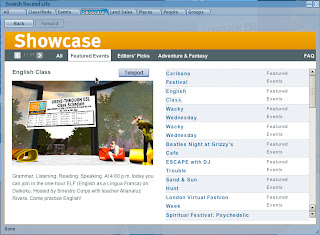 Wednesday June 8 The 4pm PDT class was published in second position in the "Featured Events" section of the Destination Guide in SL™.

Magros and I were swamped, flooded, overtaken by 63 visitors in 3 hours, at least these were those recorded by the radar.

Too bad none of us had the time to take a picture
Posted by Giovanni Erba at Thursday, June 09, 2011 No comments:

ESL Group Story Writing Class May 29, 2011
Several years ago, I placed an ad in a newspaper offering to buy a rare book. No one ever answered the ad, and after a while I forgot all about it.

After five months, I got a letter from someone who told me that he had a lot of amazing rare books.
He wrote: "we need to have a meet talking about the deal."

I was happy that someone was interested but he hadn't written his or her phone number or e-mail address and there was no return address. So I thought it was a joke.

The signature was also very strange. I showed it to a friend who told me: "It looks like an SL™ name.”

The book in question was: The Memories of Taras Schevchenko" (who is not related to the player, for those of you who are wondering).

He was a Ukrainian poet and I thought SL would be the best place to look for someone interested in a rare book.

I thought, "Why would someone send me such a detailed offer to buy a book, ask me to meet, but not provide a way for me to contact him or her?" I tossed the note into the fireplace. As it began to burn, puffs of smoke began to rise from the burning letter. The smoke took the form of a tiny man. It looked like a holograph!