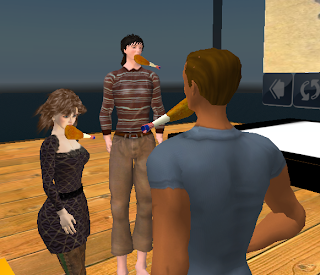 This morning, I decided to work in my garden.  I had not cared for my garden in many months so it had become overgrown with weeds.  I took out my gardening tools, kneeled down, and began to work.
I had decided to remove all the flowers and plant a vegetable garden instead, so I would have food to eat.  When I was pulling up some roots, the dirt collapsed and fell down and a big hole appeared below.  Maybe it had been made by an animal. I decided to see how deep it was.
I thought it must be some kind of animal's nest, or so it seemed. Then I tried to look carefully down into the hole when I heard a big animal growling back up at me.
I wondered if I should run or just listen to what was happening. Then I saw some eggs in the hole. I thought it would be a good idea to cook them, so I needed to steal them and take them back home with me.
I tried to get a basket from my sister to put the egg inside and take them back to my home. I was happy because my sister could cook the eggs for us, then we would have a good meal today.
The eggs were partially covered by dirt so I gently pushed the dirt back away from them. Then, very carefully, I lifted the eggs out of the ground and placed them in the basket.  I was surprised to find that the eggs were very heavy. They almost felt like rocks! Also, they were a strange color. They were blue with tiny yellow specks, and the specks seemed to be glowing.

As I put the eggs in the basket, I thought I felt something moving inside, but I wasn't sure. I took a better look and I heard a tiny voice. It didn't sound like an animal, it sounded like someone speaking an unknown language. Then I heard a big noise coming from the hole and then a huge animal, like a big prehistoric chicken, came out of the hole.
Now I saw what the glowing thing was and what I heard before.  A huge, huge, weird chicken appeared in my sight!  She seemed angry about her baby eggs which I had robbed just before she came.
Now I didn't know what to do because I was sure the eggs would be very delicious but I was worried because the chicken was very angry, and I also thought that it might be illegal to eat this kind of chicken. While I was thinking these things, I was looking at one of the eggs and I saw that there was some sort of star inside the egg.
It (the big chicken) seemed to try to communicate with me in an unknown language but I did not understand what it was saying.  Mr. Tweak, who is a scientist and works in a lab, shouted at me.
He told me that he should take this chicken back to his lab because it looked like one of the prehistoric chickens shown in his book, and that currently, his group was researching this kind of chicken. It seemed to be a resurrected fossil.
I was so hungry and those eggs were looking real good and that star-thing in the middle of the eggs made me think of yummy star fish (I liked to eat weird things), but my fear of the angry chicken-mother and my sense of right-and-wrong got the best of me so I reluctantly turned the eggs over to Professor Tweak.
"Professor Tweak, I'm hungry" I told him as I gave him the eggs. He answered me: "Have you ever heard the saying: It's better to have an egg today than a chicken tomorrow?" "You can have a BIG chicken today." "…if you can catch it."
Also the Professor said "Why do we have to behave ourselves or why do we have to be patient all the time?" And then he started to heat his pans in the kitchen. There came a sweet smell of gravy, from the kitchen and that's when I saw a big smile on his face.
Now I wanted some! Now I wanted to crack the eggs open. Something strange was happening to the eggs, you could see that, if you paid attention and looked closely at them. One of the eggs was very different, so I looked at it closely to see if I could find something else. It was a strange thing. I saw a very small girl in this special egg.
When I tried to heat the egg, the egg broke suddenly, and then small chickens started coming out. The chickens stared at us and started saying something in an unknown language. I was shocked and afraid of the chickens because they looked angry. 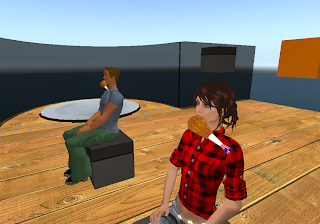 But Professor Tweak smiled, and said:” Let us also have these small chickens as a meal together.”
One of the chickens took out a small device that I knew from SL: a translator.It started to speak in its language and the translator started to say: "You ain't  gonna eat me sir. No way. Oh no no no!" “I have been in this egg for centuries, I'm all skin and bones. There's no meat on me." “Let's go to KFC. We can have some crispy, juicy and greasy chicken there." So we all climbed into Prof. Tweak's van and we went to KFC. He paid for all of us.
The end.